Autism from a personal perspective 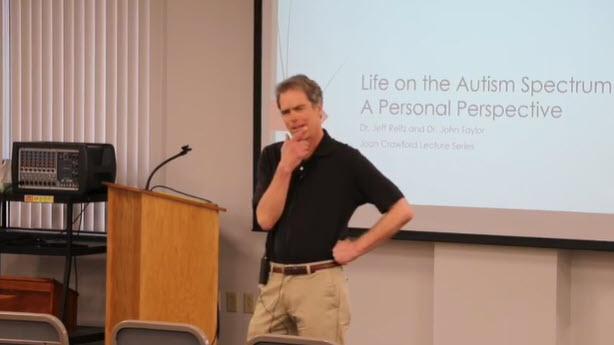 "My credentials are that I'm on the Autism Spectrum," Reitz told a Joan Crawford Lecture Series audience at Garrett College last Wednesday night. "Who better to tell you what it's like than someone who is on the spectrum?

"I'm on the high-functioning end, but take that with a grain of salt," Reitz, a professor of mathematics at Garrett College, said with a laugh. "That's like an energetic sloth . . . he may be energetic for a sloth, but you wouldn't imagine him swinging from tree to tree."

Reitz, who mixed humor with a wealth of ASD information, co-presented with Dr. John Taylor in a presentation aptly titled, "Life on the Autism Spectrum: A Personal Perspective". Taylor, whose background includes special education and mental health education, has a son who is on the Autism Spectrum. While Reitz spent decades unaware of his ASD, Taylor said he knew his son, Zack, was on the spectrum when Zack was just four months old.

"I'll never forget the day I knew Zack had Autism," said Taylor, whose son is now 23. "I was holding my son in a chair, looking at him and talking to him, and he just started rocking back and forth. The realization sent fear through me."

Taylor noted meeting the diagnostic criteria for ASD requires a child to have persistent deficits in each of three areas of social communication and interaction: social-emotional reciprocity, nonverbal communication behaviors, and the development, maintenance and understanding of relationships. An ASD diagnosis also requires a child to exhibit at least two of four types of restricted, repetitive behaviors: stereotyped or repetitive motor movements, use of objects, or speech; inflexible adherence to routines, or ritualized patterns of verbal or nonverbal behavior; highly restricted, fixated interests abnormal in intensity or focus; and/or hyper- or hyporeactivity to sensory input.

"A person on the spectrum may not know how to initiate a conversation or react to someone starting a conversation," said Taylor. "They may have poor eye contact – they can't use multiple senses at once, so they may look at your mouth to focus what you're saying.

"They also may not read body language well or understand the need for personal space," added Taylor. "And they may have an inability to maintain and build friendships."

While Taylor said he was alarmed at Zack's diagnosis, Reitz was initially perturbed when a friend suggested about a decade ago the possibility that he was on the spectrum.

"I was kind of like in a snit – maybe it lasted a few days – until I researched the signs and it was like, ‘Check . . . check . . . check,' " said Reitz, pretending to check boxes off a list. "Gradually, I began to see it kind of differently – now, at least, I had an excuse for my behavior. That explained a lot of things."

Taylor – who came to Garrett College after serving as professor of health and special education at Glenville (WV) State College – said the services available to Zack was a key factor in that choice.

"He is the reason I'm working at Garrett College and living in Garrett County," said Taylor. "There are very few services in West Virginia for adults with autism. This is giving him a chance to live life the way he should be able to live it."

Reitz, meanwhile, playfully pushed back on whether his situation should be classified as a disorder.

"I don't like the word disorder," declared Reitz. "Who gets to decide what's a disorder or what's not?

Reitz told the audience that he relies heavily on what he termed "Aspergian Humor."

If diagnosis of ASD seems more prevalent today, Taylor said that's because it is.

"The DSM-5 underwent significant changes in 2013," said Taylor, referring to the Diagnostic and Statistical Manual of Mental Disorders, Fifth Edition, published by the American Psychiatric Association (APA). "They combined all of those related disorders into one category – Autism Spectrum Disorder.

"There was a subsequent study in Great Britain involving 27 people who were not previously diagnosed as on the spectrum," continued Taylor. "Under the new standards, 24 of the 27 were diagnosed as ASD."

Taylor noted an ASD diagnosis puts stress on every member of the family.

"Eighty percent of marriages with a child who has Autism ends up in divorce," said Taylor. "Siblings can also come under a lot of stress. There's embarrassment – there's also some anger."

"It's quite taxing to my brain," admitted Reitz. "After class, I'm so depleted I go back to my office and collapse in my chair. For the next 20 minutes or so, I'm just like a zombie. The mental energy depletion feels like when your physical energy is depleted."

"My primary goal," said Reitz, "is to make you understand what it feels like to live on the Autism Spectrum."